Cered – Ceredigion Language Initiative and Code Club, part of the Raspberry Pi Foundation, are pleased to launch new Welsh language resources. The launch will be held at Mentrau Iaith Cymru’s stand at the Urdd Eisteddfod in Builth Wells on 29 June between 10am and 12pm. 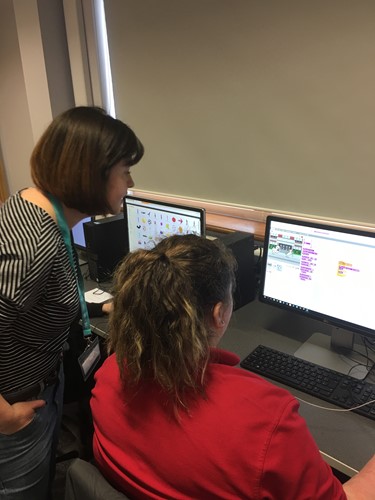 The launch will give a chance for teachers, parents and children to see the new resources that have been created in Welsh with Code Club. Anyone who is interested in seeing the resources are welcome to call at Mentrau Iaith Cymru stand during the launch to see the project. The resources will also be available online at https://projects.raspberrypi.org/cy-GB/codeclub

The project was funded by the Cymraeg 2050 Grant, which is a key element of the Welsh language strategy, Cymraeg 2050: A million Welsh speakers.

Llinos Hallgarth, Development Officer at Cered said, “It’s been a pleasure for us at Cered to be part of this project with Code Club and to develop the resources that are available, to learn to code in Welsh for children. During the training sessions, we’ve had contact with teachers and volunteers across Ceredigion and south west Wales who want to start Code Clubs in their area, and it’s great that the resources are now available to do that in Welsh.”

Cered and Code Club have collaborated to release 21 Scratch projects in Welsh, to be used at Code Clubs a growing network of 494 coding clubs taking place in Wales. As part of the grant, five Train the Trainer courses were also held for volunteers and teachers, to provide the skills and confidence to start Code Clubs in their communities.

Adam Williams, Wales Regional Coordinator for Code Club said, “Creating Code Club projects in Welsh has been a huge step forward in what we can provide to Code Clubs in Wales. There are many Code Clubs that are run in Welsh schools already but now they can use the Welsh language provision. We’re really proud to have developed these resources with Cered and it’s been great to be able to meet so many volunteers and teachers who want to get involved. Learning to code in your mother tongue is really important. We believe that coding is for everyone - in every language!”

Lowri Johnston has played a key role throughout the project, including co-delivering 5 training session across Wales. Lowri will be at the launch with Cered and Code Club to show the new resources at the Mentrau Iaith Cymru stand at the Eisteddfod.

To learn more about Cered, which is a part of Ceredigion County Council, go to their website: www.cered.cymru.