Canolfan Meugan and Canolfan Steffan held an Eisteddfod for the service users at Neuadd Felinfach on 7 June. 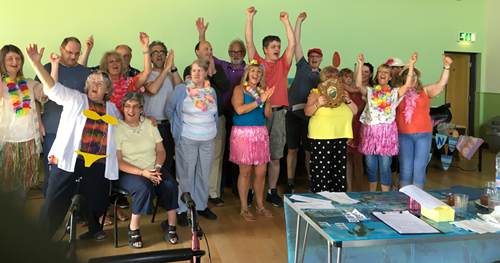 Canolfan Steffan is a community support base for adults with learning disabilities whilst Canolfan Meugan is an integrated service.

The Eisteddfod theme was ‘Wales, year of the sea’ and those attended dressed in beach-wear. Competitions were based on art and craft work created during craft classes, which included sandcastles made from re-cycled material, a collage using items from the beach and drawings turned into postcards. There was also performances consisting of group singing, dancing as well as individual acts. Scones made during cookery class were judged on taste and appearance.

Janet Broome, Project Worker at Canolfan Meugan said, “It was fantastic to see the Eisteddfod so well attended by service users, families, friends and carers. I give thanks to all staff at Canolfan Steffan and Canolfan Meugan for their hard work in making the day a great success. A big thank you also goes out to our two judges, Steffan Jenkins and Sara Morgans who both stepped in at the last minute. Congratulations to all at Canolfan Meugan who won the shield this year.”