On Monday evening, 13 May at Cardigan Castle, a group of children and young people across the south of the county were given an opportunity to perform in an end of year production as members of Clwb CICA’r Ffin, a new Welsh Performing Arts Club in Cardigan and north Pembrokeshire. 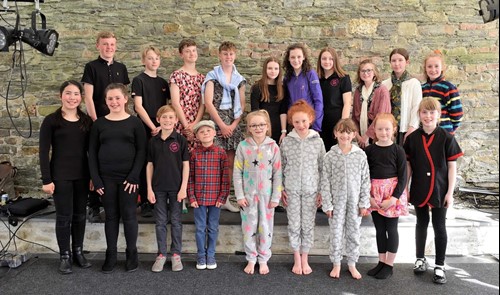 19 children and young people between the age of 8 and 14 showed off their acting and performance skills by presenting a series of sketches, dialogues and monologues, most of them scripted and created by the children themselves.

Clwb CICA'r Ffin was established in October 2018 by Cered: Menter Iaith Ceredigion and Menter Iaith Sir Benfro in partnership with Theatr Genedlaethol Cymru and in collaboration with Theatr Mwldan Cardigan. Many children in south Ceredigion and north Pembrokeshire are already members of CICA a performance company that performs an annual musical as part of Cardigan's Gŵyl Fawr cultural festival.

CICA meets for a fixed period of time between April and June each year. Clwb CICA’r Ffin’s aim is to create a Welsh language performance club to offer new opportunities throughout the year for young people and children through the medium of Welsh.

The Club which includes two age groups, years 4 to 6 and years 7 to 9, meets every other Monday evening at Theatr Mwldan in Cardigan to take part in a wide variety of skill sessions which includes dance, music, scriptwriting, backstage and performance.

Cered Manager, Non Davies said, “This was a chance for us to see what the children had learnt and it was great to note how they had grown in confidence, not only in relation to performing in public but also in terms of creating their own material - all through the medium of Welsh. The club is an opportunity to promote the Welsh language in a fun way while preparing and encouraging children and young people to join CICA which supports one of the area's most important Welsh cultural festivals.”