On 14 November, a team from Ceredigion Youth Justice and Prevention Services (CYJPS) were finalists for the Howard League’s Community Awards. 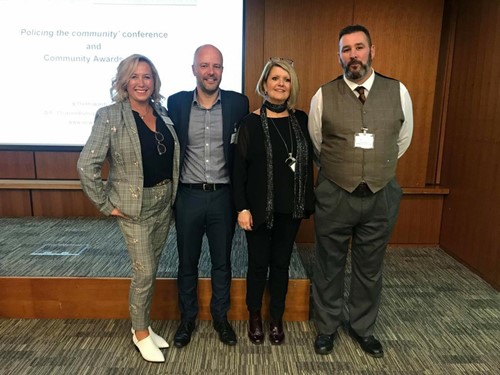 At the Awards held in London, the most successful UK-wide ‘Policing the community’ programmes were awarded for their excellence and best practice.

CYJPS were shortlisted for their 2017/18 intervention programme, Prosiect Pic Yp (‘Project Pick Up’). Funded by the Home Office, the project aimed to divert vulnerable young people between 14 and 18, at risk of becoming involved in serious and organised crime.

The programme provided an opportunity for at-risk young people to learn and recognise certain situations and practice ways of responding to keep themselves safe. The team, who worked together with Choices, Dyfed-Powys Police and Ceredigion Youth Service, provided a range of activities, including mountain biking and surfing.

The key aim of the programme, linked to a Cognitive Behavioural approach, was designed to challenge thinking patterns and pre-conceived beliefs and attitudes. It also aimed to change attitudes of offending and reduce the risk of further crimes by teaching problem-solving skills and developing values and behaviour.

Councillor Catherine Hughes, Cabinet Member responsible for Children Services and Culture said, “I commend Ceredigion Youth Justice and Prevention Services for their tireless work on this project and congratulate them on the recognition they've received. Prevention programmes such as this is vital to protect vulnerable young people from harm and to support them from going on to commit crimes.”

Positive changes were recorded across the majority of participants of Prosiect Pic Yp. This suggests that making constructive life choices was more likely following the intervention. Funding for phase two of the project has recently been awarded to CYJPS to extend the project to younger age groups and incorporate the link between Adverse Childhood Experiences (ACES).