Thomas Evans, from Ceredigion, has been selected to join 10 other young people from across Wales to sit on a National Youth Board. The board has been formed to support Welsh Government (WG) to design a whole-school approach to emotional wellbeing and mental health. 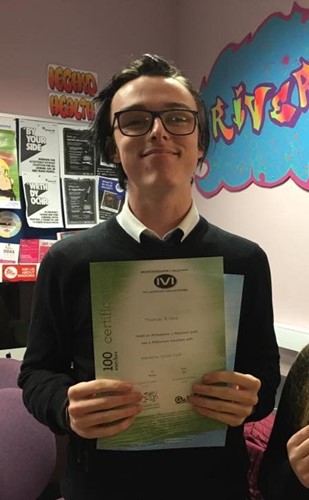 The Youth Board is led by national youth organisations, Young Wales and Together for Children and Young People (T4CYP). Thomas’ role on the board will involve advising and scrutinising WG’s whole school approach team and the T4CYP team with their development and delivery of services.

Thomas, an Ysgol Gyfun Aberaeron pupil and an active member of Ceredigion Youth Service said, “As an individual who’s had experience with mental health support services and is a general advocate for mental health awareness, having the opportunity to sit on a board such as this is a dream for me. This role will allow me to personally influence the future of mental health services, with the hope of improving the lives of children and young people. This board proves that giving young people the opportunity to influence decisions which affect the lives of young people is inarguably a recipe for success!”

The Board will meet with WG officials, AMs, Health Board officials and other key figures, such as the Children’s Commissioner to improve mental health and emotional wellbeing services for young people across Wales. Thomas will have the opportunity to feedback the board’s developments to other young people through the Ceredigion Youth Council.

Cabinet member for Learning Services, Councillor Catrin Miles said, “It’s incredibly important that young people are given the chance to have their say on matters that affect them, and this is a fantastic opportunity for young people to directly influence and ensure that the approach designed for schools does, in fact, work for young people. I’ve had the pleasure of working with Thomas through the work of Ceredigion Youth Service and the Ceredigion Youth Council and I’m extremely proud of his achievement. On behalf of the council, I wish him the best of luck in his new role as a representative from Ceredigion who’ll be influencing policy and Welsh Government’s work programme to support the mental health and wellbeing agenda in Wales.”

The National Youth Board was formed as a result of recommendations made to Welsh Government from the ‘Mind Over Matter’ report. The report, which looked into the emotional and mental health of children and young people in Wales, identified the need for a stronger emphasis on early intervention and building emotional resilience.