On Thursday, 9 August, a celebratory event to mark the centenary of the RAF was held at the West Wales Airport, Aberporth. 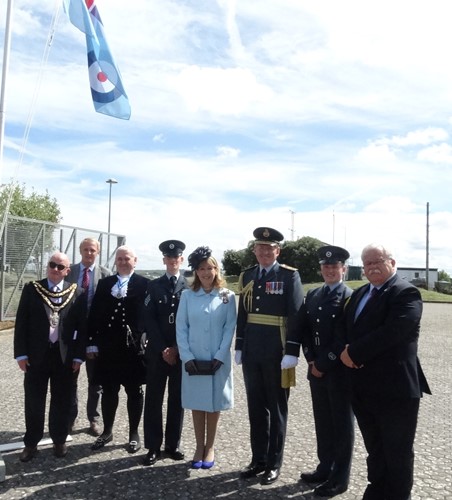 The celebrations began at 12 noon with the raising of the Royal Air Force ensign with the salute taken by Air Officer Wales, Air Commodore Adrian Williams, OBE ADC RAF, who is originally from Denbigh.

During the event guests observed a fly-by of Hawk aircraft from RAF Valley and viewed displays, created by QinetiQ, Thales and Air Cadets Ceredigion, detailing the history of the RAF at Aberporth and the work currently being undertaken at the Range.

Air Officer Wales, Air Commodore Adrian Williams OBE ADC RAF said, “It was a great privilege for the RAF to be in Ceredigion today to celebrate the RAF centenary with the local community. It was special that we were at the site of the former RAF Aberporth station, now West Wales Airport. It was particularly poignant for us to be able to carry out a ceremony today of raising the RAF Ensign at Aberporth, a ceremony that was last carried out by the RAF in 1984 when the RAF Ensign was lowered and RAF Aberporth was closed. Days like this help underline the important connections there have been between Ceredigion and the RAF over countless years and the RAF is very grateful for the support that the people of Ceredigion have always given to us. I also really enjoyed meeting the local Air Cadets from the Cardigan and Aberystwyth districts, who carried out a very impressive Parade and are a true credit to their local communities.”

Work began on constructing Aberporth airfield in 1939, originally known as RAF Blaenannerch. It was re-named RAF Aberporth in 1941 when the RAF station was opened, under the RAF Army Co-operation Command and was first established as a military testing range in Cardigan Bay during the Second World War.

Local Veterans and members of the Ceredigion Armed Forces Community Covenant were also present at the event.

Councillor Paul Hinge, Ceredigion County Council’s Armed Forces Champion said, “Today has been a successful marking by Ceredigion of the RAF Centenary and all this has come about by the effective partnership working between ourselves, West Wales Airport, Thales, QinetiQ, RAF at Aberporth, MOD Aberporth and the two Air Training Corps.”

For more information on MOD Aberporth visit the website aberporth.QinetiQ.com.