Set-back for Cylch Caron but ambition and commitment remains

The construction company WRW has been appointed as the contractor for the Cylch Caron Scheme. The news comes after Cylch Caron was awarded Welsh Government funding to design the scheme. The Llanelli based company was successful after a tendering process.

Funding from the Integrated Care Fund has allowed the Cylch Caron partners to instruct WRW to produce a detailed design of the scheme.

The impressive Cylch Caron scheme is being developed in partnership between Ceredigion County Council, Mid-Wales Housing, Hywel Dda University Health Board and the Welsh Government. It will provide a brand new building designed to provide health and social care services; together with specialist housing for people who have care needs in the Tregaron area. More on the Cylch Caron Scheme here.

The Cylch Caron draft Full Business Case has been submitted to the Welsh Government to establish the grant funding levels for the scheme.

The impressive Cylch Caron scheme is being developed in partnership between Ceredigion County Council, Mid-Wales Housing, Hywel Dda University Health Board and the Welsh Government. It will provide a brand new building designed to provide health and social care services; together with specialist housing for people who have care needs in Tregaron. The new building will replace the existing Tregaron Community Hospital, Bryntirion Resource Centre and GP surgery.

Once the level of grant funding has been decided, the Cylch Caron partners will each need to give final approval to go ahead with the scheme. More on the Cylch Caron Business Case here.

The proposed Cylch Caron Integrated Resource Centre in Tregaron has taken an important step closer to being built following the signing and sealing of the Development Agreement between partners.

The Development Agreement sets out the arrangements between the partners, outlining how the scheme will be built and managed in the longer term.

Many of the signatories signed the Development Agreement after a meeting of the Cylch Caron Project Board. They include Delyth Raynsford, Independent Member for HDdUHB; Councillor Hag Harris, Ceredigion County Council Chairman; Richard Martin, Board Member for MWHA and Charles Brotherton, Company Secretary of MWHA.

The other signatories of the Development Agreement are the Chief Executive Officer and Vice Chair of HDdUHB, Steve Moore and Judith Hardisty; Morag Bailey, Chair of MWHA’s Finance and Risk Committee. The agreement was also signed by Ceredigion County Council’s Corporate Lead Officer for Legal and Governance, and the authority’s Monitoring Officer, Elin Prysor.

Councillor Catherine Hughes, Ceredigion County Council Cabinet Member and Chair of the Cylch Caron Stakeholder Board said, “After a lot of hard work and dedication by all partners, it is pleasing to see the Development Agreement being signed and sealed. This has taken time to ensure that it includes all the relevant information agreed by the partners.”

The invitation period to tender for the design and build of a new fully-integrated health, social care and housing centre, Cylch Caron in Tregaron has closed. The submissions received are currently being evaluated.

The contract opportunity was published in the Official Journal of the European Union on 12 February 2018. The top five scoring contractors were invited to tender to deliver this much needed scheme.

Councillor Catherine Hughes, Chair of the Cylch Caron Stakeholder Board, said: “The tender application is a big step for the Cylch Caron project. We thank all companies from the construction industry who showed an interest in developing this centre on a design and build basis. We look forward to hearing the outcome of the evaluation.”

The proposed Cylch Caron Integrated Resource Centre in Tregaron has moved closer to fruition, following the successful completion of the Pre-Qualification stage of the Invitation to Tender.

The invitation to tender was published in the Official Journal of the European Union on 12 February 2018 with the top five scoring contractors now being invited to tender to deliver this much needed integrated health, social care and residential extra-care scheme.

The tender for a design and build solution has been developed with the aim of delivering best value for money and modern health, social care and extra-care facilities for current and future generations.

Tenders are invited for the design and build of a new fully-integrated health, social care and housing centre, Cylch Caron in Tregaron.

The tendering opportunity has been advertised in the Official Journal of the European Union, and the Pre-Qualification Questionnaire (PQQ) published on 12 February 2018. Completed PQQ submissions must be made online through etenderwales by Noon on 15 March 2018.

Following a previous unsuccessful exercise the Cylch Caron Project Board voted to explore new tender options for the design and construction of the facility. Subsequently, this tender for a design and build solution has been developed to deliver best value for money and fit-for-purpose health and extra care facilities, for current and future generations.

Following the appointment of Mid-Wales Housing Association as the delivery partner for the Cylch Caron extra care scheme, the project has been moving forward swiftly.

On 31 October 2016, a successful visit to two good practice examples of extra care schemes in North Wales for for members of the Cylch Caron Project and Stakeholder Boards was organised by Ceredigion County Council and Mid-Wales Housing Association.

The visits provided an excellent opportunity for Councillors and staff of the Cylch Caron project to speak to staff at Hafan Gwydir, Llanrwst and Awel-y-Coleg, Bala to gain first-hand knowledge of how the schemes operate in practice. It was also an opportunity to meet some of the residents who enjoy living in their homes and the services that are on offer.

Both schemes have several features in common with the proposed plans for Cylch Caron. Hafan Gwydir, Llanrwst, managed by Clwyd Alyn Housing Association, is a purpose-built extra care development. The homes provide one- and two-bedroom apartments for rent and for part-purchase, 24-hour on-site domiciliary care and support, an adjoining health centre and on-site GP surgery.

Tregaron community get together for Cylch Caron partner

The community of Tregaron and the surrounding area came together on Tuesday, 13 September to meet the recently appointed Cylch Caron development partner, Mid Wales Housing Association. The event also provided an opportunity to view the architect’s preliminary concept drawings for the development.

Councillor Catherine Hughes, Chair of the Cylch Caron Stakeholder Board said, “This was a day for the community to meet Mid Wales Housing Association, from local children, to the GP, to the residents of Bryntirion Resource Centre and Tregaron Hospital and the wider community.”

A community engagement event was held in the evening, which helped gather the views of local people, organisations, service users and businesses on the project. The information gathered will help inform a Health Impact Assessment for the project, ensuring that wherever possible, the facility will have an opportunity to improve the health and wellbeing of the service users, staff and the wider community.

Councillor Catherine Hughes added, “the evening event held at Ysgol Henry Richard was an opportunity to be part of the conversation as to how Cylch Caron will provide sustainable Health, Social Care and Housing services for our community. It was also an opportunity to have a first view of the architect’s preliminary concept drawings.”

Successful outcome for Cylch Caron as Delivery Partner is appointed

Following an open tender process, Mid Wales Housing Association has been successful in being awarded the contract for the delivery of the Cylch Caron project.

Rebecca Evans AM, Minister for Social Services and Public Health, said, “The appointment of Mid Wales Housing Association as the Delivery Partner for Cylch Caron is another important step forward in the development of this innovative centre. Cylch Caron will bring health, social care and housing together under one roof. In keeping with the principle of the Social Services and Well-being (Wales) Act 2014, these services will place prevention and early intervention at the heart of everything they do, helping people to stay well and live independently.”

Interested parties were required to submit a tender proposal to Ceredigion County Council and Hywel Dda University Health Board. A Panel consisting of officers from both organisations evaluated the proposal against three stages namely Qualification, Quality and Commercial. Each Evaluator was allocated proposals to evaluate relative to their area of expertise, ensuring the tenderer was capable and had the necessary skills to deliver the contract.

On Thursday, 24 March, over 100 people came together in Tregaron to the Cylch Caron Celebration and Learning Day.

Professor Drakeford walked down to Tregaron Memorial Hall to be greeted by over 20 stalls from organisations and charities all working together in the Cylch Caron area. 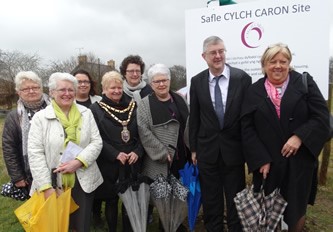