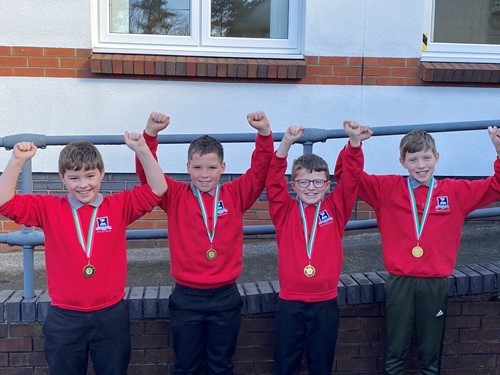 Over recent months, pupils from a number of Ceredigion schools have been competing in the Cwis Dim Clem competition. On Tuesday 03 March Ysgol Henry Richard represented Ceredigion in the inter-counties final and finished in second place against schools from Carmarthenshire, Pembrokeshire, Brecknockshire and Neath Port Talbot.

Cwis Dim Clem is a quiz competition organised by South West Wales’ Welsh Language Initiatives which sees year six pupils at Welsh medium schools answer all sorts of questions on various topics including geography, history and maths to sport, music and food. The aim of the competition is to develop new Welsh medium opportunities for school children and to foster relations between schools and the Welsh Language initiatives.

Councillor Catrin Miles is the Cabinet member responsible for Learning Services, Lifelong Learning and Leisure. She said: “Congratulations to Ysgol Henry Richard on reaching very near to the top in the competition. The Dim Clem quiz competition is very important and a great opportunity for pupils in year 6. It’s an opportunity to take part, speaking in public, learn and develop knowledge on a range of subjects, use the Welsh language, compete and socialise.”

The Ceredigion rounds of the quiz were organised by Cered and this included a school round, a local round and a county round. 14 schools in Ceredigion competed this year which was double the number that competed in 2019. Following some passionate competing, Ysgol Henry Richard won the county round and earned the right to represent Ceredigion in the final in Carmarthen on 3rd March. Ysgol Cilgerran from Pembrokeshire won first prize with Ysgol Henry Richard coming second and Ysgol Pontyberem from Carmarthenshire coming third.

Steffan Rees, Cered’s Community Development Officer said: “Cwis Dim Clem gives a new opportunity for pupils to compete in a Welsh medium competition against other schools and it was nice to see these pupils have so much fun testing their general knowledge to the max. It was also great to see one of Ceredigion’s schools doing so well in the final.”