On March 15, Ysgol Henry Richard’s Cooking Club hosted a bake sale at the school and raised over £300 for Comic Relief. The cooking club is led by Ceredigion Youth Service in partnership with Ysgol Henry Richard, Tregaron. The club baked all sorts of cakes and sweet treats. 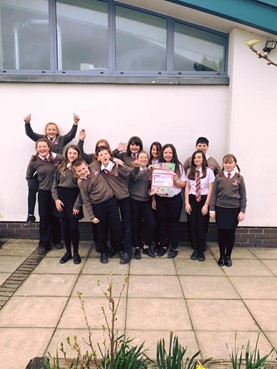 The event was organised and led by young people, with the support of their Youth Worker, Rebeca Davies. Rebecca said, “Members of Ysgol Henry Richard’s Cooking Club worked extremely hard to bake hundreds of cakes and host a cake stall in the school, in order to raise an incredible amount in support of comic relief. On behalf of Ceredigion Youth Service and the cooking club, we would like to extend our thanks to a number of local shops who donated towards the event in support of a good cause; Spar Tregaron, Caron Groceries, Caffi Hafan, Riverbank Café and Morrisons Aberystwyth. Aberaeron and Cardigan Youth Clubs also supported the event by baking and donating cupcakes.”

Members of Ysgol Henry Richard’s Cooking Club said, “We are really pleased with the success of our bake stall. We would like to thank everyone who purchased a cake, which together helped us raise over £300 for Comic Relief!”

For more information or to find out what opportunities are available to you, head over to their Facebook and Twitter pages at @GICeredigionYS or contact the team on 01545572352 or youth@ceredigion.gov.uk.