Some of Cardigan’s shoppers and businesses witnessed a surprise visitor to the town on Friday, 18 January, as a sizeable and noisy crew sang and guided Y Fari Lwyd along the High Street to celebrate the New Year, in an event organised by Cered: Menter Iaith Ceredigion. 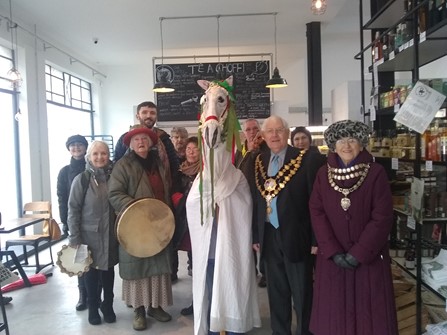 Y Fari Lwyd is a traditional Welsh custom that usually occurs around Christmas, the New Year and Hên Galan, whereby a horse’s skull is adorned with ribbons and bells and is guided from door to door in a feast of music and humour. By the middle of the 20th Century the custom had almost disappeared, however in recent years a number of areas have decided to reintroduce the custom.

The event’s route started at Cardigan Castle at midday before proceeding along the High Street to Awen Teifi and the Guildhall before coming to an end at Crwst. Y Fari Lwyd was greeted to the town by Ysgol Gynradd Aberteifi pupils that were positioned at certain points along the event’s route. Accompanying Y Fari Lwyd were a number of the area’s prominent musicians such as Wyn Jones, Gwyn Morris, Delyth Wyn and Jonathan Rees and ten enthusiastic Welsh for Adults learners coordinated by Philippa Gibson. The script was prepared by Carol Byrne Jones.

Cered and those that took part intend to hold a similar event next year in order to build on the success of this year’s pilot and hoping that the weather will be better. If anyone would like to take part in the fun, contact Cered on: cered@ceredigion.gov.uk or 01545 572 350.