On Wednesday, 13 November, the final of the brand new quiz competition ‘Ar Eich Marciau’ organised by Cered and Ceredigion Actif was held at Aberaeron Rugby Club. 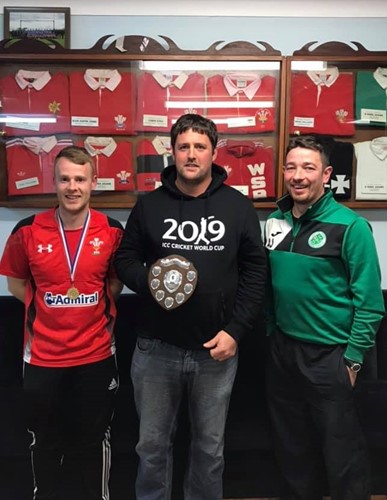 Four teams had reached the final having shone during the local rounds of the competition. After an hour of challenging questions, Tregaron Turfs FC were triumphant with Crannog FC in second place and Aberystwyth Cricket Club in third. The winning team received a shield to keep for a year.

‘Ar Eich Marciau’ is a bilingual sports quiz competition for Ceredigion sports clubs with the aim of promoting the Welsh language in a fun and inclusive manner. The competition was a rare opportunity to bring clubs from various sports together in order to socialise and inspire them to make more use of the Welsh Language in their activities.

Non Davies, Cered Manager said, “Ar Eich Marciau has been an opportunity to work with individuals and clubs across the county to promote the use of the Welsh language in sports. Ceredigion has a wide range of different clubs and it’s been fun to bring those clubs together not only to compete but also to socialise. By organising a bilingual quiz we’ve hopefully been able to show how the Welsh language can be incorporated into all aspects of the club’s activities. Congratulations to all the teams who took part and especially to our 2019 champions – Tregaron Turfs!”

The intention is to hold the competition annually and to encourage more clubs to join in the fun in 2020.