Tribute night for the stars of the Aeron Valley 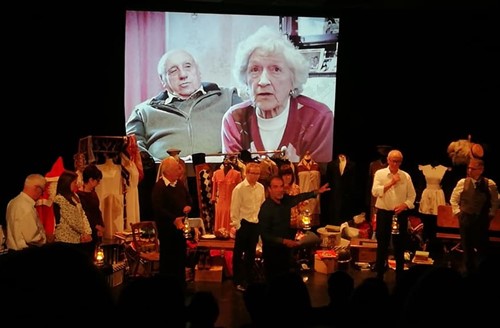 Aeron and Grett were born in the Aeron Valley a week between each other during the 1920s and became well-known after performing in theatres across parts of Wales over a period which spanned 50 years.

The sold-out tribute evening, organised byTheatr Felin-fach in association with Theatr Gydweithredol Troedyrhiw, looked back at the work and lives of Aeron and Grett.

To remember the generation of young people lost during the Great War, the communities of Felin-fach and Ystrad Aeron built a Memorial Hall. From 1927, Tyngwndwn drama company used the hall as a theatre for Christmas performances, which drew audiences from far and wide. For Aeron and Grett, this hall was to be their drama college with Tyngwndwn’s no-nonsense actors as their tutors.

By the mid-1950s, the two had ‘graduated’ and were quickly gaining the admiration from audiences in village halls across Carmarthenshire and Pembrokeshire as well as Ceredigion. In 1973 after over 50 years of touring and performing, Tyngwndwn drama company decided to call it a day. For Aeron and Grett, however, this was only just the beginning of their story. Without losing a beat, they stepped from the village hall stage to the open creative space that had just been created on the outskirts of Felin-fach; Theatr Felinfach.

Hywel Evans, Lecturer-in-Charge at Theatr Felin-fach in its opening years, reflected on this time, “To someone like me brought up in Cardiff, seeing Aeron and Grett at their creative work was an eye-opener.”

In June this year, they chose to exit the stage of life within one week of each other, having shone as stars in the theatre of their inheritance for over 60 years.

Euros Lewis, who also worked at the theatre in the 1970s, said, “Aeron and Grett were well-known for their great sense of fun. But their acting was something that they took absolutely seriously. It wasn’t a hobby or something to do in their spare time. The creative process was at the core of their lives. It was an integral part of who they were and central to their drive and ability to contribute to what is the most important of all imaginative ambitions: creating community.”