On 8 November 2019, Ceredigion’s Member of Youth Parliament (MYP), Thomas Kendall and the Deputy MYP, Huw Jones represented the county in the annual UK Youth Parliament takeover debate. The debate was chaired by the Speaker of the House of Commons, Sir Lindsay Hoyle and Deputy Speak, Dame Eleanor Fulton Laing. 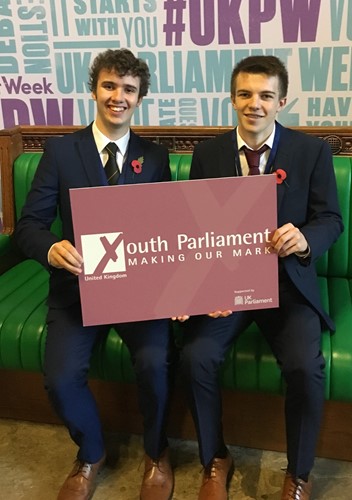 Over 200 young people from across the UK gathered in the Houses of Commons Chamber.

Following on from the Make Your Mark Campaign led by Ceredigion Youth Service, which saw over 2000 young people vote, a number of important issues were debated including Protecting the Environment, a Curriculum for Life, Put an End to Knife Crime, Mental Health and Child Poverty.

The Members of Youth Parliament decided that Protecting the Environment was the UK wide priority topic, and End Knife Crime should be the devolved national campaign.

Thomas and Huw will meet with Ceredigion’s MP following the general election to discuss, and where possible implement the changes set out by the UK Youth Parliament vote in 2019. Thomas and Huw will also present their experience at the House of Commons to their peers at the next Youth Council meeting.

Thomas Kendall, MYP for Ceredigion said, "It was a great honour and privilege to represent the young people of Ceredigion in the House of Commons at the annual UK Youth Parliament debate this year. There were many inspiring speeches from young people across the UK, championing issues which are important to them and their constituencies. Huw and I look forward to now meeting and working with Ceredigion’s MP in order to see how we are able to begin achieving these goals."

Gwion Bowen, Children and Young People’s Participation Officer, Ceredigion Youth Service, said, “It’s vitally important that young people are given a platform to raise their voice and opportunities to take part in the political process. Both Thomas and Huw play an active role in Ceredigion’s Youth Council and were elected to represent Ceredigion’s young people in the this year’s UK Youth Parliament takeover event in London. We will now be supporting Thomas and Huw with their local campaigns to benefit young people across the county.”