Ceredigion County Council were given special commendation in the ‘Local Government Changing the Way We Work Award’. This was for their success in incorporating ecological considerations into their work on managing and maintaining the county’s highway green estate. 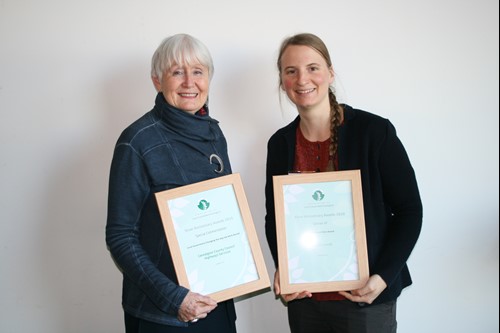 The Association of Local Government Ecologists (ALGE) has marked its 25 year anniversary with a series of awards. These awards recognise its members’ and their partners’ contributions to furthering nature conservation and the way it is delivered at the local level.

Julia Pschera, Ceredigion County Council’s Highways Ecologist, said, “I am very pleased that Ceredigion’s work in this area has been given official recognition, especially as many of our residents are unaware of the great work being done which is contributing to preserving endangered meadows and associated species.”

Ceredigion was an early adopter of Roadside Verge Nature Reserves (RVNRs). All grassland sites among these reserves are managed with a late season cut and subsequent removal of the cut vegetation. This thereby imitating traditional hay meadow management which gives wildflowers a chance to flower and set seed.

Councillor Dafydd Edwards, Cabinet Member responsible for Highways and Environmental Services together with Housing, added “We are looking after more than 2,000km of highway in Ceredigion. While the safety of road users is our overriding concern we are pleased that we are able to manage some of the associated verges for pollinators and other wildlife. The commendation is an encouragement to continue and further our work in this area”.

In the picture is Madeleine Moon, presenting the award to Julia Pschera, Ceredigion County Council.