With an enormous red dragon leading the way, hundreds of people paraded along Cardigan’s High Street in the town’s first colourful St. David’s Day Parade on Friday, 1 March. The parade was organised by Cered: Menter Iaith Ceredigion, to celebrate our national identity and the Welsh language in Cardigan. 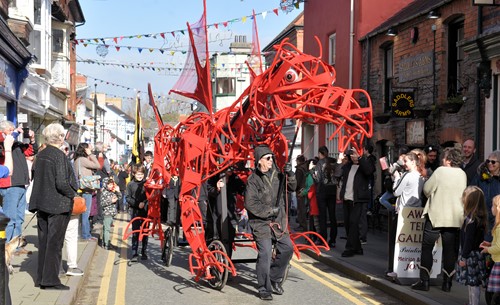 The parade started at the Guildhall at 1 p.m. before moving along the High Street towards Cardigan Castle. The parade was led by Small World Theatre’s spectacular red dragon which moved its wings and entertained the crowds along the route. Hundreds of children and adults followed by carrying Welsh flags, many of them dressed in traditional Welsh costumes. There was also an appearance by a huge puppet of the local mythical creature ‘Y Wiber’!

Having arrived at the castle, a short ceremony was held to mark the occasion. Jac Davies, Director of Cardigan Castle, welcomed the masses and musical entertainment was provided by children from two of the local primary schools, Ysgol Gymunedol Penparc and Ysgol Gynradd Aberteifi. Ben Lake MP and the town mayor, Councillor John Adams-Lewis, also addressed the crowd. Proceedings were brought to a close with a prayer offered by the Reverend Irfon Roberts and a rendition of the national anthem.

Cered’s Manager, Non Davies said, “Cardigan’s first St David’s Day parade was an enormous success – it was wonderful to see so many people of all ages- children, young people and families all joining together to celebrate their Welsh identity. The enthusiasm was overwhelming and we are grateful to everyone for their support. Although this was the first parade of its kind in Cardigan, judging by the response I’m certain it won’t be the last!”

For further information, contact Steffan Rees, Cered’s Community Development Officer on 01545 572 350 or by e-mail on: steffan.rees@ceredigion.gov.uk.