Running for the language in Aberystwyth!

Ras Yr Iaith 2018 will take place between 4 and 6 July and the first day of the Ras will close in Aberystwyth with a feast of music for all tastes. 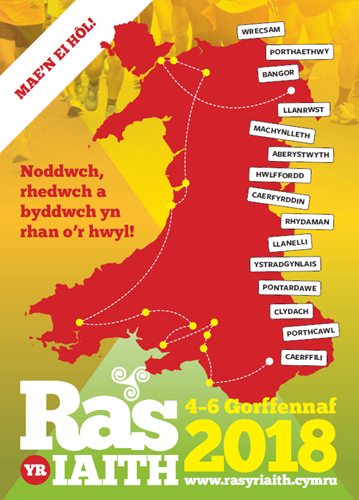 The Ras is based on the Korrika race which started in the Basque Country, which has triggered similar races in Brittany (Redadeg) and Ireland (an Rith). Wales’ Ras yr Iaith was established in 2014 and the second Ras was held in 2016 when it travelled from Bangor to Llandeilo. This year the Ras will go from Wrecsam to Caerffili – its longest distance to date.

It is not an athletic and competitive race but rather a race for the Welsh language by the people of Wales. It is an opportunity to draw fluent Welsh speakers, learners and non-Welsh speaking people together to celebrate our language for all of us.

As the race travels between 15 communities this year, the Baton yr Iaith (Welsh Baton) will be passed from one to the next in order to symbolise the importance of transferring the Welsh language from one generation to the next as well as spreading the language across the country. The Ras provides an opportunity to link the Welsh speaking heartlands and areas where the language is less commonly spoken.

Steffan Rees of Cered Menter Iaith Cererdigon, who is one of the co-ordinators of the Aberystwyth stage said, “It would be great to see a long string of runners whizzing around Aberystwyth town waving banners and singing the Welsh language. Whether you are a school, sports club or a bunch of work friends, form a team and register to participate in the Ras to have a lot of fun, to keep fit and to celebrate our language.”

In order to raise money, the Ras provides the opportunity for businesses and local organisations to sponsor their local stage of the race for a contribution of £50. The name of the organisation or the names of the individuals will be shared on Ras yr Iaith social media pages, website, placards in the heart of Aberystwyth and announced by Dewi Pws, the Race guide on day one.

“It is time for the Welsh language-lovers to come together, and show a bit of fun for the language. The Ras is a great way to draw people together and celebrate the fact that we are still here!”, said Sion Jobbins, founder of Ras yr Iaith after he visited the successful races over the Irish, Breton and Basque.

In addition to the race itself, there will then be music at the Bandstand which will start at 5p.m. The ukulele band, The Pictôns from Ysgol Henry Richard will perform first before handing over to the choir from the Ponterwyd area, Meibion y Mynydd about 5.30pm. After the Ras draws to a close, the popular folk singer Gwilym Bowen Rhys will be entertaining, and closing the evening in style will be Y Cledrau.

The Aberystwyth stage is organised jointly by a Committee of local residents and officials from Cered. If you are interested to participate in the race, contact Steffan Rees or Rhodri Francis from Cered on 01545 572 350/01970 633 854 or cered@ceredigion.gov.uk.