A regional summer picnic was a great success for Syrian refugees at Gwersyll yr Urdd, Llangrannog. The picnic on 1 August was enjoyed by 200 Syrian Refugees who have come to live in Ceredigion, Pembrokeshire, Powys and Carmarthenshire. 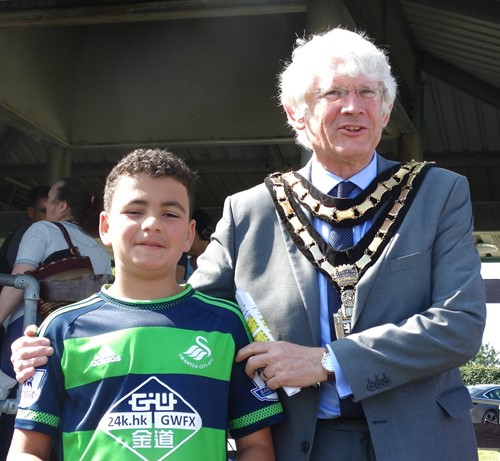 It was an opportunity for children and families who have settled locally to meet with others who have had similar experiences. Both children and parents spent the day socialising and had a chance to try out many of the activities on the site, including quad biking, go-karts, high rope and trampolines.

In 2015, the UK Government said it would relocate 20,000 Syrian refugees from the Syrian War in the UK by May 2020. Ceredigion, Powys, Pembrokeshire and Carmarthenshire councils participate in the refugee resettlement programme in collaboration with many other local authorities across the UK.

Ceredigion County Council Chairman, Councillor Peter Davies attended the event to welcome the refugees to Llangrannog. He said: “I was delighted to welcome the many families of Syrian refugees to Llangrannog and Ceredigion. I was struck that despite the horrors of the Syrian War, Ceredigion and other councils have been able to help some families reach safety. It was touching to see so many families enjoying a beautiful day on the Welsh coast when their situation could have been so very different.”

Councillor Davies continued: “Despite coming from different countries and cultures, we enjoyed each other’s company. We all have a strong common humanity. I was delighted to make a new friend on the day too. Despite having never met Hamza or his friends before, we easily had common ground in our beloved Swans. Things like this transcend any differences.”

Councillor Ellen ap Gwynn is Ceredigion County Council’s Leader and is the Chair of the Ceredigion Refugee Resettlement Group. She said: “I am delighted that they all had an enjoyable day and that they got the opportunity to meet and mix with other Syrians who have been through a similar ordeal before coming to Wales. I’m sure Gwersyll yr Urdd in Llangrannog was a fantastic setting for a fun day out for the children.”

2019 is the third year that the four counties in the Wales region have come together for a summer refugee event. In 2017 Powys hosted refugees for a fun day at the Royal Welsh Showground. In 2018 they were at Llandovery RFC.