A new shared use path for cyclists and pedestrians between Bow Street and IBERS at Plas Gogerddan has been completed. The path was officially launched on 6 June 2019. 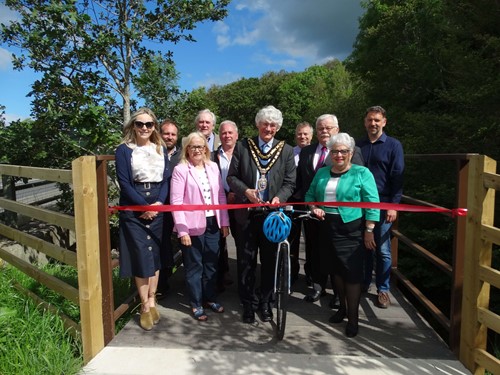 The path was built by Ceredigion County Council, with support from the Welsh Government’s Local Transport Fund. It provides a traffic-free link between Bow Street and Penrhyncoch, along with the new Innovation and Enterprise campus being developed by Aberystwyth University at Plas Gogerddan.

The scheme will also offer a link to the Bow Street Passenger Transport Interchange. Residents also have better access to the woodland paths at Gogerddan and Pwll Crwn.

The council has worked in partnership with Aberystwyth University to implement the scheme. This partnership will continue as further plans are being developed for Phase 2, which is to extend the path between Plas Gogerddan and Penrhyncoch.

The project has developed many environmental benefits. A new otter ledge has been fitted under the road bridge to protect them. A natural wildlife habitat area has also been created. Trees and a new hedge have been planted which provide a greater diversity of native species.

Councillor Dafydd Edwards is the Cabinet member for Highways and Environmental Services together with Housing. He said, “In the current economic climate, providing new beneficial facilities is increasingly difficult. Therefore, I would like to take this opportunity to praise the ongoing partnership approach being undertaken by council officers with Aberystwyth University and Welsh Government.”

“Also, to thank the council officers for developing the project with local contractors, TTS for delivering a high-quality project that will boost healthier lifestyles through encouraging walking and cycling in Bow Street and Penrhyncoch and surrounding communities in a safer environment.”