A new Creative Team has been appointed in Theatr Felinfach. The team’s new members - Lowri Angharad Briddon and Sioned Hâf Thomas – will play a central role in the Theatr’s creative process. 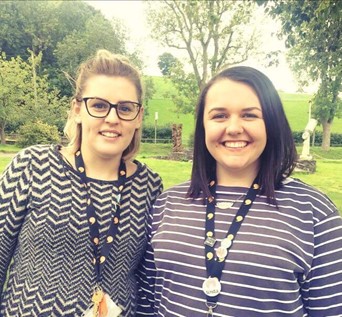 Interviews were held in August to appoint a Senior Creative Officer to lead the Creative Team at Theatr Felinfach. We’re very pleased to announce that Lowri Angharad Briddon was appointed to the post. Lowri has worked as part of the Creative Team for two years since she was appointed to the role of Creative Officer for Dance and Theatre in August 2016. Since then, she’s had an extremely busy time and has established many new activities such as Clwb Clocsio (Clog Dancing Club), Gwerin-ffit (Folk-fit) and the Performing School.

Earlier in September, further interviews were held, this time to appoint a Creative Officer for Dance and Theatre and we’re delighted to announce that Sioned Hâf Thomas was appointed to the post. Sioned has worked in Theatr Felinfach over many years on various specific projects. She has also played the Fairy character, ‘Tani Tychrug’ for numerous years in the Welsh language pantomime. The future promises to be exciting with a new team in place to lead the participatory programmes.

The Cabinet member responsible for Culture, Councillor Catherine Hughes said, “The Theatr has a proud history of creating unique and creative productions. I have no doubt that Lowri and Sioned will build on this valuable tradition and create all sorts of innovative and exciting productions in the future.”

Lowri and Sioned had an opportunity to work together on an exciting new project at the end of September creating a dance piece working with seven primary schools in the south of the county. The piece was performed in Cardigan on 29 September as part of the town’s Gŵyl y Cynhaeaf event. With the Theatr’s famous annual Christmas Panto fast approaching, Lowri and Sioned have a busy period ahead.