The first event of this year’s Yr Ŵyl Ddrama, a collaboration between Theatr Felinfach and Theatr Gydweithredol Troedyrhiw, will be an evening that will stir memories and tickle the chuckle-muscles. 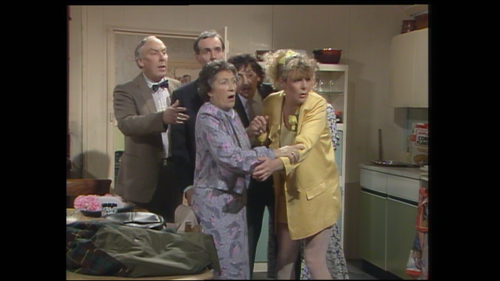 30 years have gone by since a young farmer on a mountain near Tregaron suddenly stopped his tractor and ran to the house to scribble on the first piece of paper to hand the strange ideas in his head about an ordinary farm facing ordinary problems, with the assistance of a not so ordinary farm-hand.

The name of the farm – as many generations of S4C viewers know full well – was Nyth Cacwn, and the farm-hand, of course, was Wiliam.

Nefi bananas! will be held on Friday, 5 October, at 19:30. Wiliam and a few other characters from Nyth Cacwn will be back together at Theatr Felinfach to watch two episodes of the unique sitcom and to share with the audience their joyous experience of bringing Nyth Cacwn every step of the way from Ifan’s imagination to the small screen.

But the evening won’t be one of reminiscence just for the sake of it. June this year brought the death of one of Ceredigion’s most celebrated actresses, Grett Jenkins, known throughout Wales as Nyth Cacwn’s Gwyneth - the feisty, no-messing Mam and boss.

Ifan Gruffydd said, “Grett was an amazing actress. She was close to 70 years old when she made her television debut on Nyth Cacwn. But with a lifetime of hard-won experience on Wales’ stages behind her, the switch to the small screen was no problem at all for her.”

Compering the Nyth Cacwn get-together will be Cennydd Jones, Pontsian – one of the sit-com’s greatest fans despite not being born when it was first broadcast! Cennydd says, “My work is to ensure that we all have a great time as we look back and laugh together. But the festival organisers want me to do something more than that. They want me to make the event a doorway for my generation to step through and catch a glimpse of the theatrical vibrancy that gave Grett and her peers such creative and artistic understanding.”

Euros Lewis, one of the organisers and co-writer of Nyth Cacwn added, “We’re grateful to Cennydd for taking up this challenge. The festival’s next big event (in mid-November) will be a tribute evening to Grett Jenkins and Aeron Davies (one of her fellow actors who also died earlier this year). At the heart of the Nyth Cacwn evening will be an invitation to today’s young actors and writers to help us create this special celebration of our indigenous theatre and culture.”

Those who respond to the challenge will have an exciting month of research, discussion and script-writing ahead of them. Euros continues, “This looking back has to be something more than indulgence. The challenge facing us is to release the renewable energy presently locked deep within the memories – an energy source that has the potential to fire-up a new generation of creative thinkers and egalitarian artists.”

Noson Nefi Bananas! At Theatr Felinfach on Friday, 5 October at 19:30 and suitable for the whole family. Every ticket is £3.50 which you can pre-order on theatrfelinfach.cymru or 01570 470697. Nefi bananas – what a bargain!