On 2 March, Amgueddfa Ceredigion Museum are very proud to be hosting the very best of Welsh music to celebrate St David’s Day weekend. Llwybr Llaethog, an experimental Welsh language band who’ve been creating dub sounds using an all manner of technology since 1985, will be joined by bilingual beat-boxer and live looping artist, Mr Phormula. 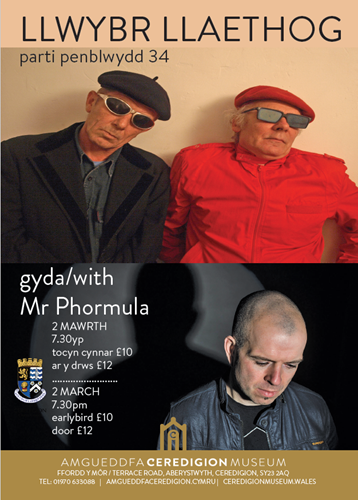 Founded in Blaenau Ffestiniog in 1985 by John Griffiths and Kevs Ford, Llwybr Llaethog mix a variety of musical genres such as rap, dub, reggae, hip hop, and punk in their music.The two were heavily influenced by reggae and the punk scenes that were sweeping the UK in the 70s.

After several years touring northern Europe with punk/ska band, The Managing Directors, the turning point came in 1984 when John was impressed by breakdancing, and the sounds of DJ Red Alert whilst on holiday in New York. The band were promoted heavily by the late DJ John Peel OBE, and went on to be known for their trademark sounds of turntable scratching, audio sampling, hip-hop, and cut-and-paste production.

Llwybr Llaethog said, “We’re so pleased to be asked to play at Ceredigion museum. Teaming up with Mr Phormula again and hanging out with DJ Badly is going to be an evening to remember.”

With a career as diverse as the Welsh landscape within which he is rooted, Mr Phormula’s inspired performances and vocal compositions have gained him international recognition as a leading beatboxer, rapper and producer.

The fluidity of Mr Phormula’s bilingualism is distinctive and this, along with slick rhythms, compelling bass lines and vocal dexterity has earned him a broad and committed fanbase across Cymru, the UK and the USA.

Mr Phormula has collaborated in the past with hip hop greats including; The Pharcyde, Jungle Brothers, Boy better Know, Plan B, Professor Green and Krs-One. Mr Phormula’s innovative new releases continue to grow the Welsh hip-hop scene at home, while promoting this dynamic bilingual genre abroad.

Doors open at 7:30pm. Earlybird tickets ar £10 and £12 on the door. For more information and to find out what else is on at the museum, follow Amgueddfa Ceredigion Museum on Facebook, visit www.ceredigionmuseum.wales or contact 01970 633 068.