On Saturday, 9 November at 7:30pm and for the first time in over a decade, Mid Wales Opera (MWO) returns to Theatr Felinfach with a radical reworking of John Gay's 1728 ballad opera The Beggar's Opera. Join Mrs. Peachum, her daughter Polly and the Beggar in their bawdy, ballsy take on relationships and the relative virtues of virginity. 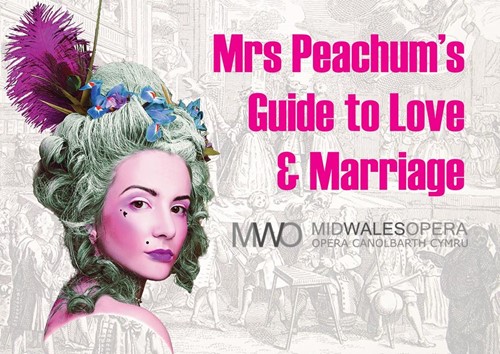 Horrified to learn of Polly’s illicit marriage to an errant highwayman, Mrs. P contrives to get the rascal hanged so Polly can claim the reward. Loyalty and love are put to the test as murder, rage and fury drive this rumbustious tragicomedy towards its conclusion. Will things really be left so unhappily and will Polly remain true to her man and abandon her mother to the lure of London Gin?

MWO are delighted to premiere this new one act opera, adapted by Richard Studer, in a new musical version by Jonathan Lyness, accompanied by MWO's Small Stages Ensemble of four musicians, a cast of three singers including the brilliant Northern Irish mezzo Carolyn Dobbin as Mrs Peachum (Madame Popova, The Bear, Small Stages 2017) and Welsh soprano Alys Mererid Roberts as her feckless daughter Polly. Carolyn Dobbin was in the last production that MWO brought to Theatr Felinfach in 2008, which was Tales of Hoffman.

As with John Gay's original ballad opera, the score is bursting with melodies both familiar and new, from Lillibolero to Greensleeves. MWO's restoration comedy is filled with as many musical twists as there are in the plot. Though the trio of characters may live in the gutter, musically they are looking to the stars...

During the second half and following the interval the team will sing a medley of delights exploring love and marriage in all its forms - a curtain raiser for the Spring 2020 Main Stage tour of Mozart's The Marriage of Figaro.

MWO's Small Stages brings live opera to the heart of communities across Wales and the Borders, touring to theatres, village halls and community venues.

Tickets are available from the Box Office on 01570 470697 or Online at theatrfelinfach.cymru.

Tickets are £15 for Adults, £14 for OAPs and Members and £10 for Students and Children.