The Bro Teifi School Memorial Garden was officially opened on 09 November 2018. This is a new home to the War Memorial to former pupils of Llandysul Grammar School who lost their lives during the First World War and the Second World War. 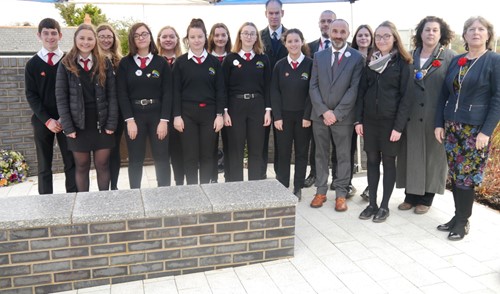 The Memorial Garden was opened and the Memorial was unveiled by Ysgol Bro Teifi Head Prefects.

Ysgol Bro Teifi's Headteacher, Robert Jenkins, said “It is a privilege to officially open the Memorial Garden, which is a special tribute to former pupils of Llandysul Grammar School and Ysgol Dyffryn Teifi. The garden was designed by an Architect from Ceredigion County Council involved with the project and the Ysgol Bro Teifi Project Manager during the construction phase. It was built by a group of local apprentices under the supervision of the construction company, Willmott Dixon. I hope that the garden will be a reminder of those former pupils who have contributed so much to the life and society of the area.”

The War Memorial was located at Ysgol Dyffryn Teifi Library. When the school moved to Ysgol Bro Teifi, arrangements were made to move the memorial and keep it safe until enough money could be collected for its repair.

Following financial support from the Welsh Government's First World War Memorial Grant, and a generous contribution from Llandysul Community Council, the memorial was repaired to its original condition.

Mr Robert Jenkins continued, “In addition, we put in place the War Memorial, which has been for many years in the old school library. The Memorial was originally given in memory of the young boys of the area, former pupils of Llandysul County School, and the Grammar School, who lost their lives during the wars of the last century.”

16 pupils from the school who died during World War One between 1914 and 1918 are commemorated on the Memorial. It is an interesting monument because there is a representation of all the armed forces, the army, the navy and the airfield. 17 former pupils who died in the Second World War are also commemorated on the memorial.

Councilor Catrin Miles, Cabinet Member with responsibility for Learning and Lifelong Learning, said, “It's wonderful to see the opening of the Ysgol Bro Teifi Memorial Garden. I'm very pleased that the War Memorial has been repaired and give a new, worthy home for years to come. Here's a place to commemorate and remember those pupils from the area who lost their lives for us.”

Members of the community were welcomed to join the school's pupils to visit the Garden during the day, receiving a performance from the school choir. The fruit of year 7, 8 and 9 pupils’ work were on display at the school for all to see.