Making a Splash exhibition marking Year of the Sea

‘Making a Splash’ is a new exhibition at Ceredigion Museum, Aberystwyth, that takes a peep at bathing, the seaside and the Great British summer holiday. 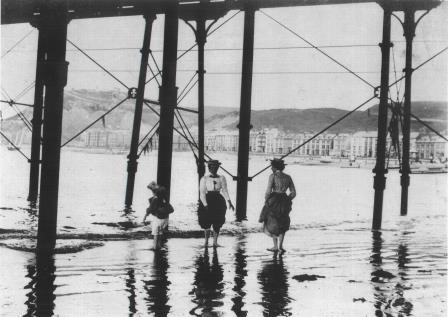 Dip your toes into the museum and see what you might find hidden in the depths. The museum has been raiding its stores to find those wild and wonderful knitted swimming costumes as well as the bloomers and bikinis that our grandparents and parents wore to soak up the surf and sun. The museum asked you to send in images of yourselves on holiday at the coast and have included some of these in the display too. The display, which will be running from 14 July to 13 October, is in recognition of 2018 being the ‘Year of the Sea’.

Andrea De Rome, Collection Access Officer at the museum, outlined some of the background to the history of visiting the seaside, “Ceredigion has attracted visitors from far and wide since it first became known as the Brighton of Wales in the 1790s.”

Looking back at the early history of those who visited Aberystwyth, Andrea found that the North Beach, between the pier and the bandstand, was one of the most popular spots for bathing, even before those structures were there.

Andrea continued, “By 1807, there were four bathing machines recorded as being situated on the north beach at Aberystwyth. These were wooden structures, like sheds on wheels, from which people could go bathing. By the middle of the 1820s there were twenty one of these machines. There were complaints that the public would gaze at those bathing but some had no qualms at being stared at. There were reports that some local people, both men and women, were addicted to the sea and would travel from the country to the coast and plunge naked into the waves.”

By the time the train came to the coast in the 1860s, sea bathing and the idea of taking a holiday away from work and home, was very popular. It was also believed that sea bathing was good for your health. The notion of ‘taking the waters’ had long been part of the whole tourist package. Many of the old railway posters advertise a visit to the seaside as being beneficial to your health, ‘Aberystwyth, where there’s health in the air and a friendly sun.’

Our joy at the seaside has not diminished, adventurous bathers leap from the wooden jetty whenever the sun appears and surfers ride the waves from Borth to Aberporth.

People at the seaside want to laugh and have fun and what better way than a puppet show on the promenade to amuse the whole family; Punch and Judy remained popular for centuries and Ceredigion Museum has a colourful collection to accompany this bright and breezy display. There are a number of puppet shows and workshops on offer for visitors to the museum. Come along and enjoy the thrills and spills of that infamous rascal, ‘That’s the way to do it!’

Whether you prefer to dip a toe in the shallows or surf those waves, parade under a parasol or lay under the sun, there is something for everyone in ‘Making a Splash’.

For more information about the exhibition, the museum the shows and workshops pick up a leaflet or look on the web site:
www.ceredigionmuseum.wales or call 01970 633088.