Radio and TV presenter Francine Stock will be choosing four of her favourite films to talk about at Ceredigion Museum, Aberystwyth on 14 July at 7pm. With clips from selected films, all of which were shown over the decades at the old Coliseum Cinema, she will be explaining her choices, with background information about the creation of these iconic films. 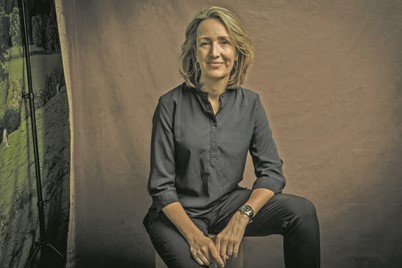 The Coliseum was originally built as a theatre in 1904 and ran as a cinema from the 1930s. Francine has chosen to discuss films from the 40s, 50s, 60s and 70s. Francine said, “I wanted to choose films that reflected an era or captured the zeitgeist of those times. By looking through the long list of films that were originally shown at the Coliseum in Aberystwyth, I came up with a list that evokes the mood of each decade.”

Francine has worked on a variety of TV programmes including Newsnight, The Money Programme, The Antiques Show and more recently The Film Programme on Radio Four.

Besides being involved in film criticism she is also a writer. Her books include novels and a social history of cinema. She has been chairperson of the Tate members council and is an Honorary Fellow of Jesus College Oxford, having studied Modern Languages there.

Francine continued, “It was so exciting to find that the daily records kept by the proprietors of the Coliseum were so detailed. Not only were the films named and the film distributor mentioned but the number of people who attended were recorded as well as the takings for each showing. There were some surprises there; films I had never heard of which seemed to attracted a big audience at the time.”

“You might recognise some of the films and this is your chance to find out more about the making and background of each film. For the seventies, I chose the award-winning ‘Butch Cassidy and the Sundance Kid’ with Paul Newman and Robert Redford. It was actually made at the end of the sixties but first shown in ’71 in Ceredigion and then brought back three more times over the decade.”

Francine will be using clips from the films to illustrate points which she wishes to make during her talk. Each of the four films will be screened at the Coliseum at a later date.

“For the sixties, I have chosen ‘The Ipcress File’ which stars Michael Caine. It is a brilliantly downbeat alternative to the cheesy Bond films of the time. Based on a Len Deighton novel it won a BAFTA in 1965. The two remaining films are less known today but were very popular in their day; the fifties being represented by ‘Mogambo’ and the forties by ‘In Which We Serve’.”

For more details on these films, you will have to attend the evening, when Francine will reveal why she believes they are so representative of those periods in our history.

Francine will be joined by Jamie Terrill, a current PhD student at Aberystwyth University, who will reflect upon his research and discuss the history of cinema going in Aberystwyth during this period.

Ceredigion Museum’s Curator Carrie Canham said, “We’re delighted to invite Francine Stock to look back on her favourite films whilst hearing more from Jamie Terrill looking about the history of the old Coliseum Cinema. This will be a truly engaging and interesting evening, especially for anyone for a passion of classic, iconic films.”