On Thursday, 24 October, Theatr Felinfach will host two performances of the puppet show ‘Dygwyl y Meirw’ (Festival of the Dead). A very timely show for the time of year celebrating the legends and traditions of the ancient Celts. 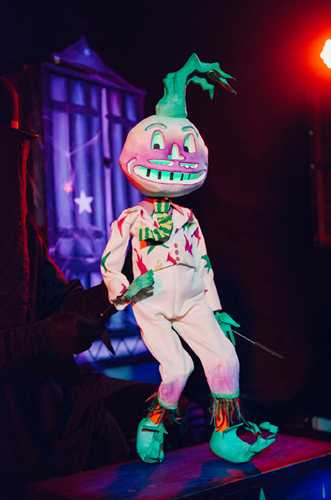 Dygwyl y Meirw is a show that celebrates the myths of our ancestors, the circle of life, and how a little girl comes to terms with her Grandfather's death. We meet traditional Welsh characters such as the Black Sow, The White Lady and Jack of the Lantern and with their help, Gwen finds new life in her Grandfather's stories, and a future as a storyteller herself.

The author and director of ‘Dygwyl Y Meirw’ is Angela Roberts. She is also a BAFTA Wales winner for Best Children’s Drama, author of the Jini Mê Adventure books and tens of other children's scripts. She is also the founder of the production company Black Star and Monkey.

In recent years Angela had found that there was a gap in the market where puppet provision for children in Welsh was concerned. She went on to create two successful shows, ‘Drwg’ and ‘Bwystfilod’, in partnership with Theatr Bara Caws. Dygwyl y Meirw is her first show under her own company name, with the support of the Arts Council of Wales.

The first performance will be a 1:30 pm on Thursday 24 October and is aimed at Ceredigion primary schools followed by a family show at 6:00 pm. The show is 45 minutes long and includes puppets and shadow theatre. Children are invited to attend the performance in Halloween costume.

Tickets are available from the Box office for £8 for adults, £7 for pensioners and £6 for children. Collect from the Box Office on 01570 470697 or go online to theatrfelinfach.cymru.