Councillor Peter Davies MBE was elected as the Chairman of the Council for 2019-2020 in the Annual Meeting held by Ceredigion County Council on Friday 17 May. 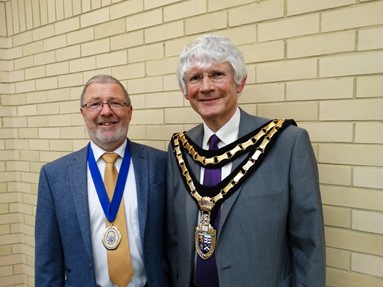 Opening the meeting and retiring as Chairman, Councillor Hag Harris opened the meeting by leading a moment of applause for the late Councillor Paul James. He then addressed the Council and reflected on his year as Chairman. He said, over the year he had had a front row seat to many events and found that Ceredigion has many excellent opportunities for the young people of the county.

After being elected as Chairman, Councillor Davies, of the Capel Dewi Ward made a Declaration of Acceptance of Office and was presented with the Chain of Office by his predecessor. He then addressed the council saying that being elected Chairman was a great honour and that he was eager to help to serve the county in the year to come.

The Reverend Wyn Thomas was appointed as the Chairman’s Chaplain for 2019-2020.

Councillor Gareth Davies, of the Llanbadarn Fawr - Padarn Ward was elected as Vice-Chairman of the Council. He made a Declaration of Acceptance of Office and was presented with the Insignia of Office by the Chairman.