Councillor Gareth Davies was elected as the Chairman of the Council for 2020-2021 in the Annual Meeting held by Ceredigion County Council on Friday 20 March. 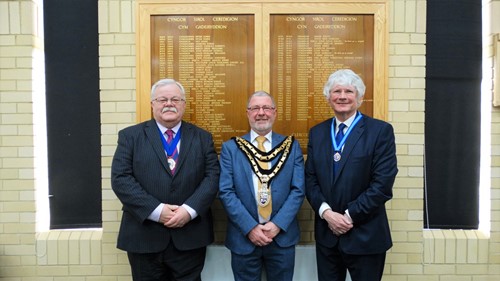 The meeting was opened by Councillor Peter Davies MBE who retires as Chairman. He then addressed the Council and reflected on his year as Chairman.

Following his election as Chairman, Councillor Gareth Davies of Llanbadarn Fawr Padarn Ward, made a Declaration of Acceptance of Office and was presented with the Chain of Office by his predecessor. He then addressed the Council saying that being elected Chairman was a great honour and that he was eager to help to serve the county in the coming year.

Councillor Gareth Davies has been a County Councillor since 2004 and has chaired a number of committees within the Council. He is a member of Llanbadarn Fawr community Council and is very active in the community of Llanbadarn Fawr. He was born and bred in New Row, Pontrhydygroes and educated at Ysbyty Ystwyth Primary School and Tregaron Secondary School.

The Reverend Canon Andrew Loat was appointed as the Chairman’s Chaplain for 2020-2021.

Councillor Paul Hinge of Tirymynach Ward was elected as Vice-Chairman of the Council. He made a Declaration of Acceptance of Office and was presented with the Insignia of Office by the Chairman.