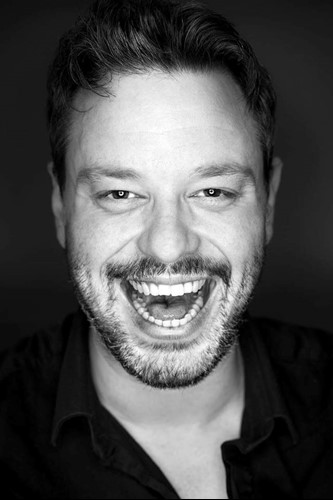 Steffan Evans is a comedian with a unique view on the world. The half ‘hambon’ hails from Eglwyswrw in Pembrokeshire and he was the support act for Elis James’ national tour during 2017. He has also performed on S4C comedy shows ‘Gwerthu Allan’ and ‘O’r Diwedd’. He is a regular contributor to the digital website ‘BBC Sesh’.

Esyllt Sears appeared on the ‘Ones to Watch’ list – Women in Comedy (out of 400 other comediennes) in the ‘Funny Women’ competition during 2017. Esyllt has appeared on the BBC Stand-Up show (S4C) and has also written for numerous programmes including ‘The Now Show’ (BBC 4).

Priya Hall is a new and exciting voice in Welsh comedy. Priya has appeared on ‘Pwnc Pum Munud’ on S4C and on ‘BBC Sesh’.

Beth Jones is a comedienne full of joy. She has performed across the country with appearances on ‘Pwnc Pum Munud’ and ‘Gwerthu Allan’ (S4C) and ‘Comedy Club @ Machynlleth’ (Radio 4 Extra).

Dan Thomas is one of the familiar faces on the Welsh comedy circuit and beyond. He has performed across Europe and has appeared on programmes such as ‘Gwerthu Allan’ and ‘Stand-Yp’ for the BBC.

The evening starts at 8pm and will be held in the Lolfa at Theatr Felinfach.

Tickets are £10 for adults, £9 for pensioners and £8 for students and secondary pupils. Tickets are available from the Box Office on 01570 470697 or online at theatrfelinfach.cymru.