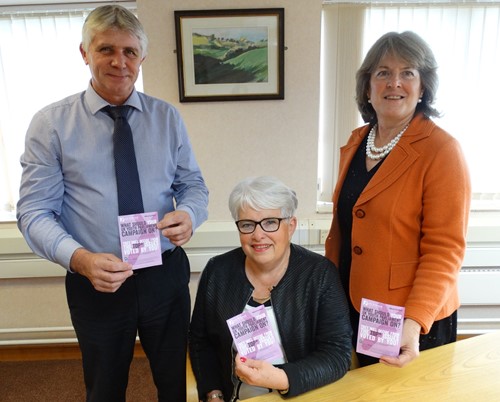 The event will see five key topics discussed by young people from across the UK. Ahead of the big debate, Ceredigion Youth Service is leading the Make Your Mark campaign in Ceredigion.

The UK Youth Parliament’s Make Your Mark campaign is the UK’s largest survey of young people’s views. Young people aged 11 to 18 are invited to take part in the ballot to shortlist what is debated in the House of Commons by Members of Youth Parliament later this year.

The annual Make Your Mark ballot, which has taken place since 2011, contains 10 policies voted for by Members of Youth Parliament including ending period poverty, mental health in schools, tackling homelessness and adapting the curriculum. This year’s campaign, which is supported by the British Youth Council, is expected to reach hundreds of thousands of young people from across the UK. Last year, a total of 954,766 young people from every corner of the country took part.

Ceredigion Youth Service Youth Workers will be gathering ballot papers from each Secondary School, College and Youth Club in Ceredigion. The vote will close in Ceredigion on 10 October and results will be submitted to the British Youth Council.

The Cabinet Member responsible for Learning Services, Lifelong Learning and Leisure, Councillor Catrin Miles said, “It’s vitally important that young people are given a platform to raise their voice particularly on issues which affect them. The UK Youth Parliament is an opportunity for Westminster to hear young people raising the issues they care about most. The Make Your Mark Campaign leading up to the UKYP debate is a valuable opportunity for young people aged 11-18 across Ceredigion to influence the topics discussed in the House of Commons in November and I would encourage all young people to take their vote.”

After the Commons debate takes place on 9 November, members of the Youth Parliament will walk through the division lobbies to vote on what should become their priority campaign for 2019. In previous years, mental health, tackling racism and religious discrimination and a lower voting age have been prioritised.

Rt Hon John Bercow MP, Speaker of the House of Commons, said: “The Make Your Mark ballot is an excellent opportunity for millions of young people across the UK to celebrate the democratic process and make their voices heard. Last year, almost a million young people voted for the crucial motions to be debated by Members of Youth Parliament, and this year looks like it will be no different. I look forward to welcoming the Members of the Youth Parliament and presiding over some truly inspiring debates.”