Ceredigion County Council has won the UK-wide ‘Local Authority Award 2019’ in the Community Sponsorship Awards 2019. The award was accepted by the council’s Leader, Councillor Ellen ap Gwynn and Cathryn Morgan, the council’s Families First and Refugees Coordinator. The awards took place on 8 October at Canada House in London. 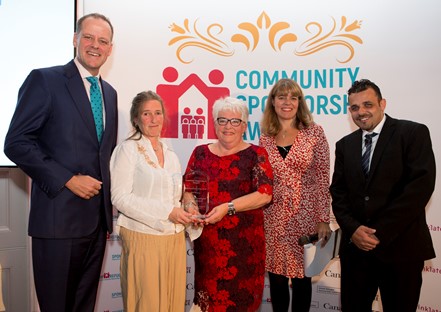 Ceredigion was one of five UK local authorities to be nominated for the prestigious award. The award is given to councils for working with community groups who help families fleeing from war, hunger and homelessness.

Councillor ap Gwynn said: “I am delighted that we have been successful in winning a UK-wide award. The greatest reward is knowing that we have helped Ceredigion communities to offer safety and friendship in West Wales to Syrian refugees escaping the horrors of civil war.”

“While I am honoured that our contribution has been recognised, we would not have won the award if it wasn’t for the dedicated communities in Aberystwyth and Cardigan. Aberaid and Croeso Teifi can also share our success.”

Tim Finch is the Director Sponsor Refuges, the Citizens Foundation for Community Sponsorship, which organised the awards. He said: “Community Sponsorship relies on thousands of quiet heroes from all walks of life. The inspiring winners from this year’s award shows that the proud British tradition of welcoming refugees is alive and well. Local Authorities are playing a vital role and we would like to recognise and thank Ceredigion Council and other local authorities playing a vital role supporting local communities to change the lives of refugee families.”

Community Sponsorship was launched in 2016 by the Home Office. It allows volunteer groups to resettle a refugee family in their community. Schemes have to be vetted by the council before it can be approved by the Home Office, who will then match refugees to the community group.