Ceredigion County Council’s Carers Unit organised a special carers event during Carers week on Tuesday 11 June 2019 to give carers a chance to relax and recharge their batteries. 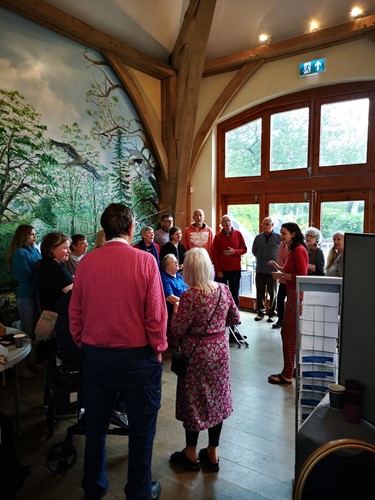 Carers week is an annual national campaign which takes place to raise awareness of caring, highlight the challenges carers face and recognise the contribution they make to families and communities.

The carers event was held at Rhosygilwen Mansion, a country retreat 10 minutes south of Cardigan. Carers enjoyed the complementary therapies such as reflexology, aromatherapy and massage that were available all day. Along with the therapies, 14 other organisations were there to provide information and advice to the carers

Carers were given a delicious lunch and had the chance to take part in many group activities running throughout the day such as Tai Chi, talks and activities around wellbeing and mental health, drumming, African singing and arts and craft. Through taking part in the various activities at the event, carers had the opportunity to meet and talk with other carers.

Events like this are only successful when well attended by carers and the Carers unit were extremely pleased to see 52 carers who braved the horrendous weather to attend the day. The Carers Unit hoped that the carers all returned home at the end of the day feeling relaxed, having enjoyed a break from their caring role.

Councillor Catherine Hughes who is a Members Champion for carers said, “The Carers Unit is to be commended for arranging another successful carers week. Rhosygilwen Mansion proved to be an excellent venue where carers were given a chance to think about their own wellbeing. Thanks to all who attended and made the day a special one for our carers”.

Arwyn Morris, Corporate Lead Officer for Customer Contact said, “It was nice to see so many carers participating in the activities and able to access a diverse network of support organisations. Thanks to all the different organisations for their continuing support, the Carers Unit for organising another successful event and to the carers that braved the rain.”

One of the many positives of the event was that organisations and individuals from the statutory and third sector, social enterprises, businesses, self-employed people and volunteers alike all worked closely together to make the day a success for carers.

Ceredigion Carers Unit would like to thank all the organisations and businesses that supported the day, including the therapists and those professionals who kindly volunteered their time and skills. The Carers Unit would not have been able to offer as many activities to the carers attending without their support.