Over the next few months, Cered: Menter Iaith Ceredigion will be supporting a group of Llan-non residents to hold a series of Welsh-medium environmental activities under the banner ‘Arwyr yr Arfordir’ - Heroes of the coast. The series of activities will start with a plastic-free beach clean on the village’s beach on Saturday, 29 September 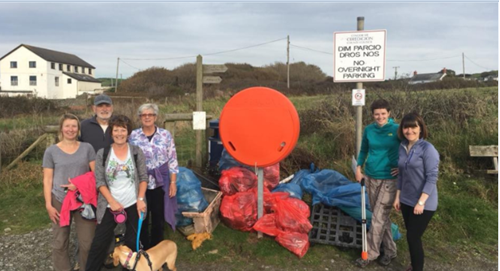 Arwyr yr Arfordir was launched in 2017 when Cered worked with the local community on a similar beach clean campaign, where over 20 local residents of all ages took part. This included a number of families looking for an opportunity to socialise in Welsh, learn about the environment and look after their community. This year, the campaign will be developed further with additional environmental activities organised for the last three Saturdays in September, October and November.

Steffan Rees, Cered’s Community Development Officer said, “It’s great to see the enthusiasm of the residents of Llan-non who want to organise something to react positively to the worldwide challenge of marine plastic pollution and to the local challenge of sustaining regular Welsh medium activities throughout the year. Hopefully the weather will be in our favour and it will encourage local people to come and join Arwyr yr Arfordir.”

All those interested are invited to join Arwyr yr Arfordir on 29 September at 3pm at Llan-non beach car park near Plas Morfa Hotel. Before starting the beach clean, Steffan Rees of Cered will give a short presentation on the impact of plastic on the environment to raise awareness of the need to reduce the usage of plastic and recycle, following which litter pickers and bags will be handed out by Keep Wales Tidy. The event will also include an activity specifically for children.

Councillor Catherine Hughes, Cabinet Member for Children’s Services and Culture, “I commend the residents of Llan-non for joing together in tackling the issue of plastic pollution in their community whilst at the same time using this opportunity to encourage residents to communicate through the medium of Welsh, whether they are fluent in Welsh, learning Welsh or have just moved to the area and hope to learn some key phrases. Cered’s positive work around the county to encourage more communities and businesses to spark a conversation in Welsh is fantastic, as Welsh is not just a language, but a culture that can make communities stronger and enjoyed by all.”

Arwyr yr Arfordir Llan-non will meet again on Saturday, 27 October and Saturday, 24 November, with details of these activities announced over the next few weeks.