During the National Eisteddfod of Wales in Cardiff this year, Wales’ first professional folk group ‘Ar Log’ released a new album – ‘Ar Log VII’, and they are making their way to Theatr Felinfach! 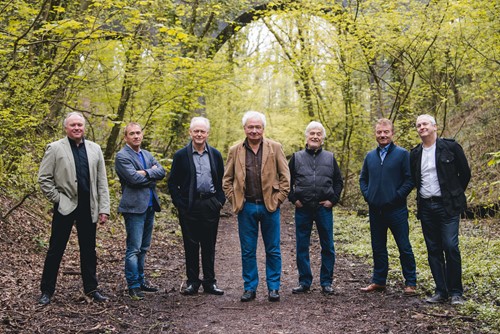 Two years ago, in 2016, the group celebrated 40 years of touring in 21 countries over 3 continents. In March 2017, they went back to the studio to start recording ‘Ar Log VII’. The album was launched in ‘Tŷ Gwerin’ at the National Eisteddfod exactly 42 years since the formation of the group, their first album in 22 years!

To promote the album, the group have organised a tour of Wales with special guest, singer and stand-up comic, Dewi Pws. The tour will open in Theatr Felinfach on Friday, 07 September at 7:30pm before visiting Pwllheli, Cardiff, Dinas Mawddwy and Llanrwst.

‘Ar Log’ was the first professional group to bring Welsh folk music to the attention of various audiences on an international level. ‘Ar Log’ was formed initially to represent Wales at a Celtic Festival in Lorient, Brittany, in August 1976, and they were encouraged by The Dubliners to continue performing as a group after the festival.

The group has travelled and performed across the British Isles, Europe, and North and South America promoting Wales, its music and songs. During their travels they have shared the stage with major international folk artists such as Alan Stivel and Dan Ar Bras from Brittany; Mary Black, De Dannan, The Dubliners, The Chieftains, The Clancy Brothers, The Furies and Clannad from Ireland; Battlefield Band, Boys of the Lough, Silly Wizard and Run Rig from Scotland and numerous ‘world music’ artists from across the globe. 42 years later, they’re still touring and have released their 11th album!