The proposed Cylch Caron Integrated Resource Centre in Tregaron has taken an important step closer to being built following the signing and sealing of the Development Agreement between partners. 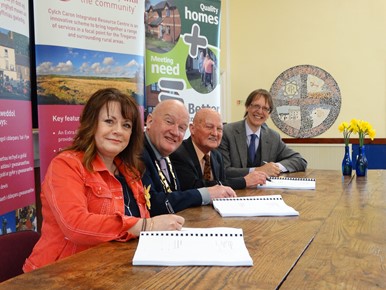 The important scheme is being developed in partnership between Ceredigion County Council, Hywel Dda University Health Board (HDdUHB), Mid-Wales Housing Association (MWHA) and is supported by the Welsh Government. The Development Agreement sets out the arrangements between the partners, outlining how the scheme will be built and managed in the longer term.

Many of the signatories signed the Development Agreement after a meeting of the Cylch Caron Project Board. They include Delyth Raynsford, Independent Member for HDdUHB; Councillor Hag Harris, Ceredigion County Council Chairman; Richard Martin, Board Member for MWHA and Charles Brotherton, Company Secretary of MWHA.

The other signatories of the Development Agreement are the Chief Executive Officer and Vice Chair of HDdUHB, Steve Moore and Judith Hardisty; Morag Bailey, Chair of MWHA’s Finance and Risk Committee. The agreement was also signed by Ceredigion County Council’s Corporate Lead Officer for Legal and Governance, and the authority’s Monitoring Officer, Elin Prysor.

Councillor Catherine Hughes, Ceredigion County Council Cabinet Member and Chair of the Cylch Caron Stakeholder Board said, “After a lot of hard work and dedication by all partners, it is pleasing to see the Development Agreement being signed and sealed. This has taken time to ensure that it includes all the relevant information agreed by the partners.”

“We can now carry on to work hard to reach the next key milestones for the project. One of which is to submit the Final Business Case to the Welsh Government and hope that it will be approved as soon as possible to allow building work to start.”