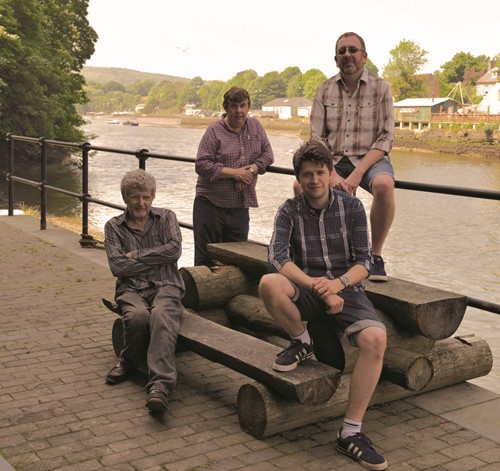 Ail Symudiad, who have been together since 1978, will be supported by a band of local lads called Argyfwng Canol Oed - ACO (Midlife Crisis). The band performs Welsh covers and had their first appearance during the TOSTA Festival 2016.

Influenced by the ‘new wave’ music including The Undertones, Buzzcocks and ‘Trwynau Coch’, Ail Symudiad’s busiest period was during the early 80s when they played at Tanybont, Caernarfon, Blaendyffryn Hall, Llandysul, and at universities, village halls, clubs and schools throughout Wales. At the Swansea Eisteddfod in 1982, Ail Symudiad had, at the time, the largest audience for a Welsh gig. During the same year they won the ‘Sgrech’ (Welsh pop and rock magazine) Best Band Award.

They formed their own label, Fflach, to release singles by the band such as ‘Geiriau’ and ‘Garej Paradwys’ and also recorded new up and coming groups, such as, ‘Y Ficar’ and ‘Eryr Wen’. Since then the label has grown and now turns out a variety of music. The studio by now also has a digital studio.

Ail Symudiad still record themselves and have released a new CD as part of their 40th celebrations called ‘Y Man Hudol’ (The Magical Place). As well as the CD, they have a new scarf including the band’s logo!

Ail Symudiad and Argyfwng Canol Oed will be at Theatr Felinfach on Saturday, 15 September 2018 at 8pm with tickets at £10. Find out more and book your tickets by contacting the Box Office on 01570 470697 or go online to theatrfelinfach.cymru