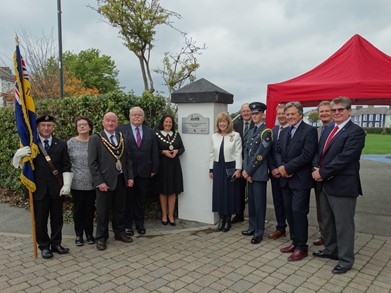 In gaining the Centenary Field status, the field will be protected in perpetuity to honour the memory of the millions who lost their lives in the First World War. Cae Canmlwyddiant Ceredigion Centenary Field – Cae Sgwâr / Square Field, Aberaeron is the first Centenary Field in Ceredigion.

Ceredigion County Council’s Armed Forces Champion, Councillor Paul Hinge said, “I am delighted that Aberaeron Town Council’s application to dedicate this fantastic green space as a Centenary Field has been accepted by Fields in Trust, and that the County Council was able to support it. It pays an important tribute to those who lost their lives in the First World War, including many young Ceredigion men went to war and didn’t return.

This has been an interesting journey and one that as the Armed Forces Champion and a veteran, I am proud to support.”

A plaque commemorating the status was unveiled by Her Majesty’s Lord Lieutenant of Dyfed, Miss Sara Edwards.

The Mayor of Aberaeron and Local Member, Councillor Elizabeth Evans, said, “Aberaeron residents are rightly proud of Cae Sgwâr’s new status as the designated Centenary Field of Ceredigion, it has a proud history of being the towns recreational field and there isn’t one community in Ceredigion whose children haven’t played on it at some point. It is a fitting commemoration in this hundredth anniversary year of the ending of the First World War and as we remember the past, we also look to the future and Cae Sgwar’s newly protected status in perpetuity as a recreational field, thanks to the Centenary Field Trust.”