A performance by Athena and Steffan Rhys Hughes at Theatr Felinfach

On Saturday 11 May at 7:30 pm, the Athena trio, will perform, alongside Steffan Rhys Hughes, at Theatr Felinfach as part of their Encore Series. 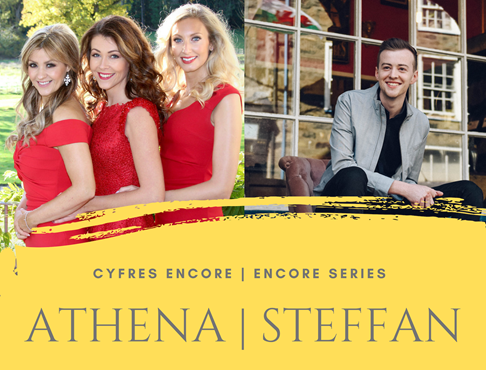 Athena, Wales’ first female classical crossover trio featuring local Bethania girl Gwawr Edwards, Sioned Terry and Ellen Williams were formed after all three artists came together one evening to perform. The trio have been very busy performing across the UK, appearing on television and radio and creating new material.

Steffan Rhys Hughes is a member of the Classical Brit award-winning group, Only Men Aloud. He also presents ‘Sioeau Cerdd Steffan Rhys’ on BBC Radio Cymru which is a musical theatre show featuring guests such as actor and director, Daniel Evans, and the Olivier Award Winner, Rebecca Trehearn.

Following the success of their recent new recordings, Athena and Steffan will perform songs featured on their brand new releases, ranging from popular classical pieces to contemporary melodies and popular Welsh favourites.

Tickets and information are available from Theatr Felinfach’s Box Office – 01570 470697 or from the website – theatrfelinfach.cymru and are £12 for adults, £11 for pensioners and members and £8 for children and students.