Blue flags to fly high over Ceredigion beaches this summer

Blue Flags will fly over five of Ceredigion’s most popular beaches this summer. Borth, Aberystwyth North, New Quay Harbour, Llangrannog and Tresaith beaches have once again been awarded the coveted Blue Flag for 2018. In addition, Ceredigion’s beaches have been awarded 4 Green Coast awards and 13 Seaside Awards. 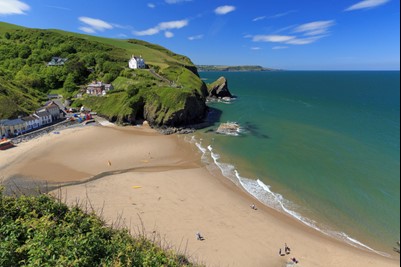 Councillor Gareth Lloyd, Ceredigion County Council’s Cabinet Member for Economic Development and Tourism has welcomed this year’s award announcement: “Once again, Ceredigion’s beaches have been recognised to be amongst the best, not only in Wales, but worldwide. The awards are a mark of quality and it’s great to see Blue Flags and Seaside Awards flags flying at Ceredigion’s most popular bathing beaches again this year. Although Ceredigion’s coastline and beaches attract visitors throughout the year, this is an excellent start to the traditional holiday season and we look forward to a busy summer.”

The following beaches have been awarded 2018 coastal awards: