The Armed Forces Community in Wales

The first point of contact for veterans seeking support.

Service launched in response to Lord Ashcroft’s 2014 Veterans’ Transition Review, which called for the confusing support system for veterans to be simplified to:

Grants of up to £100,000 available for organisations who work with the Armed Forces Community! This community includes veterans, serving personnel, their spouses and dependents.

The Armed Forces Covenant Fund Trust awards grants through specific funding programmes, each with its own aim(s) often based on community consultation.

The Armed Forces Covenant Fund Trust will be opening new funding streams to continue support to existing charitable projects that work with the Armed Force Community.

Force for Change Veterans Program: will award grants of up to £10,000 for community projects that reduce isolation and promote integration; supporting post-COVID recovery in local Armed Forces communities affected by isolation.

Sustaining Support for Armed Forces Communities programme:  This new, £6 million programme will provide funding for existing charitable projects supporting Armed Forces communities, but which need short-term support to continue, as a result of the impact of the Covid pandemic on their charitable income.

If you represent a charity or an organisation that provide assistance to serving and former members of the British Armed Forces who are in need then you can apply also for a grant from the Veterans Foundation.  For more details on this grant click here to access information. 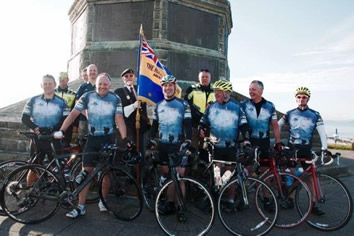 The ride coincided with the 70th centenary of the end of the second world war and aimed to remember the sacrifices by all those members of the allied forces that gave their lives for our freedom.

The team will be held a service of rememberance at the national arboretum the evening before the ride as well as fundraising to support the excellent local "Veteran films" project.

On 18th February, the Ministry of Defence launched a new veterans ID card which all service leavers will receive to mark their time in the armed forces.

The cards will allow veterans to easily verify their service to services such as the NHS, the Council, and charities, helping them to access support and services where needed.

Ceredigion County Councils Armed Forces Champion, Councillor Paul Hinge, a veteran himself, welcomed the news of the new ID card. He said, “This goes some way to the recognition that service personnel have given selflessly to the service of their country without favour or bias. I welcome this veterans ID card and hope it will provide a symbolic and noteworthy recognition of an individual’s service now they have become a veteran on completion of their service. It should help society show their appreciation of the time each person served this country when they then reintegrate back into society.”

The veteran ID card will be rolled out in two phases:

Contact the Veterans UK helpline number on 0808 1914 218 for more information or visit www.veterans-uk.info.